How to reconnect with Earth? How to re-establish the basic trust we had with nature?” 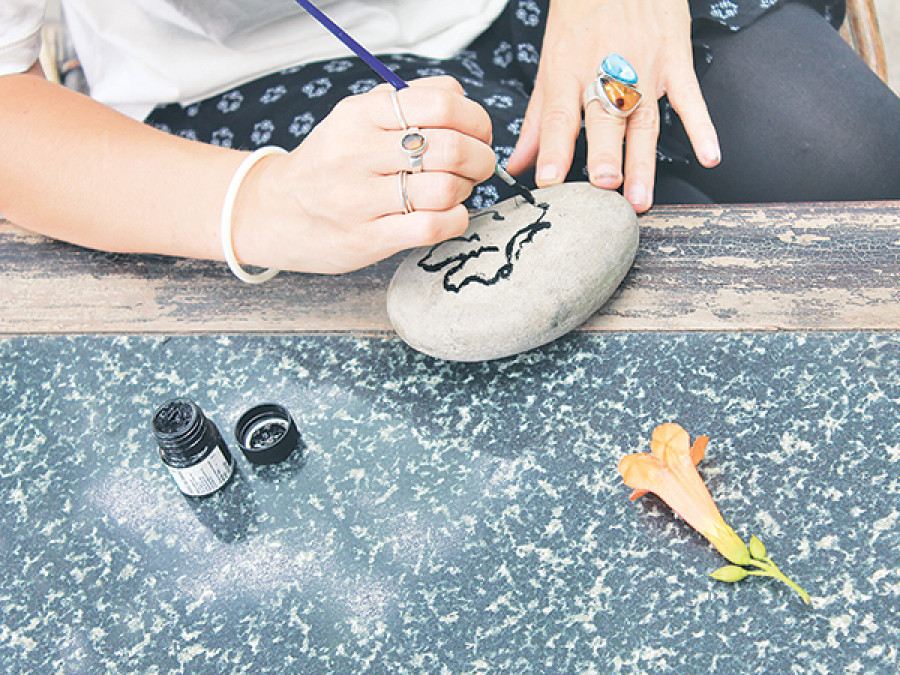 How to reconnect with Earth? How to re-establish the basic trust we had with nature?” An anxious teacher raised these questions sometime in mid-May. The government had declared dates for school openings; there was palpable anxiety in the air. A lot of adults seemed unprepared to manage groups of children inside buildings.

We were all wary of the shaky ground; our thoughts continually returned to fear.

An art psychotherapist introduced last Saturday’s session with the same questions. The therapist, who regularly uses natural materials with her clients in England, had even better reasons to draw our attention to the environment. She had a variety of plants, flowers, twigs and broken branches laid out on tables, along with paper, pencils and pastels. We were asked to choose a natural material and bring it to the circle for an activity. As an example, she described a couple of green vines she had picked and explained why she had chosen them. The idea was to use the natural material to talk about our thoughts and feelings, how our week had been, what was going on in our lives.

In retrospect, this art session has been a space for me to explore post-quake emotions without the difficulty of putting feelings into language. I had full control of myself and I had full control of the sharing space—this was perhaps the closest I have felt to nature (and to myself) since nature decided to enforce closeness upon all of us.

As the session proceeded, one woman brought a beautiful orange flower with dried leaves arranged around it. She explained how she had been busy coordinating various relief missions. There were a lot of hassles and frustrations; the dry leaves represented that. But as she was browsing through the natural materials, she discovered the bright flower, almost hidden. The flower reminded her that we often forget the central, important reason to why we do what we do, often getting bogged down by mundane processes.

I was holding a desiccated remnant that was most likely a part of a shrub at one point. Its structure resembled a tree; a few stems grew out of a main one. But its size was much smaller, its parts narrower, more elegant. Few protrusions stuck out here and there and at its ends. (I’m calling them ‘protrusions’ because they were not actually thorns, although I was tempted to use the word ‘thorny’ more than once.)

Aside from the beauty in its simplicity, there were two reasons why I had selected the plant. The first was its physical form: since it was towards the end of its life cycle, it was reduced to its most basic core. The second reason was what this form signified.

I explained that I was going through a transition. The weeks after the quake had been very busy, with non-stop action. I was constantly surrounded by people; I had very little time to myself. Gradually, we all had to consider regular projects that were pending, decide how to divide time between relief work and jobs; or maybe, design new endeavours combining both. During this period, especially in the past two weeks, I had retracted from most events, spending a lot of time on my own.

As a result, primal thoughts and emotions had resurfaced: unpleasant emotions, the kind that were “unresolved”, having to do with that most intimate part of our lives—family. Just like the plant in my hand, my emotions were wiry and skeletal. I could feel their stringy, solid-like form stuck inside me, causing discomfort, sometimes pain.

Although brown and dying, the plant did remind me of natural changes. It was once green and supple, no doubt. But it would soon crumble and turn to earth. Was that the fate for my hardened emotions as well? That they would also dissolve? But how? Air and water do their thing on plants, helping them disintegrate. Where were the agents that would work with my emotions? My emotions that needed to liquefy and start flowing once again.

After the initial round of sharing, we worked individually and used the natural materials to create art. A friend sitting next to me had a variety of things—a flower, leaves and a small, round tomato that had shades of green, yellow and orange. After working with them for ten minutes, she brought her piece back to the circle. Dry leaves were sewn to one half of a square paper. The tomato sat in the middle of a leafy patch. She explained how issues from her work had entered her consciousness during the art-making process. “I wasn’t even thinking about it actively; it just happened,” she said.

She was an architect, working with several landlords who had old houses that they were eager to demolish. They were in a hurry to build concrete structures with shiny glass windows. “We are trying to get them to preserve some parts of the old, but it’s difficult,” she continued. She had been grappling with these thoughts. The dry leaves in her artwork represented that struggle.

I had drawn a simple outline of my body with a brown colour-pencil and juxtaposed my plant—representing them with graphite lines—on top of it. I used red, yellow and blue colours to mark my brain and my heart, aspects I could surely not miss. When it was my turn to share, I said, “I think this is self-explanatory. I don’t want to say anything.”

That was a perfectly fine response, I felt—the session being a safe space to create and share according to our comfort and will. The therapist reminded everyone not to make assumptions about anyone’s work or to try and interpret it. Her colleague added a helpful thought with reference to my work. She said something along the lines of: “You have created a piece which represents your state of thoughts and emotions at this point. But if you look at it at a different time, you may interpret it differently.” In other words, the marks I had made today could mean something else later. The fact that a piece of art could carry several meanings based on our layers of perception struck me.

This is one example of a therapeutic support group. I think it is important to have more of this kind of work in Nepal. Ours is a culture that generally does not encourage open conversations.

We could perhaps turn to nature. With its incredibly abundant diversity, it provides a wide palette of in-between colours and natural materials—of various shapes, textures, smells and symbols—that can be powerful metaphors to help us tap into our subconscious and unpick parts of ourselves that are not simply black or white.

An art activity such as this works well because it is taking place in a non-directive space in which participants are given full control during the whole process. One is free to explore and investigate. Usually, when we talk to a friend or a family member with a particularly emotion-driven motive, it may be difficult to get a conversation going. Someone suffering emotionally may not always find the right words to express, but a creative visual process may provide avenues for thoughts and emotions to flow.

After that Saturday session, I felt lighter and less-burdened. I am sure that many people who take part in sessions like these will feel the same way.