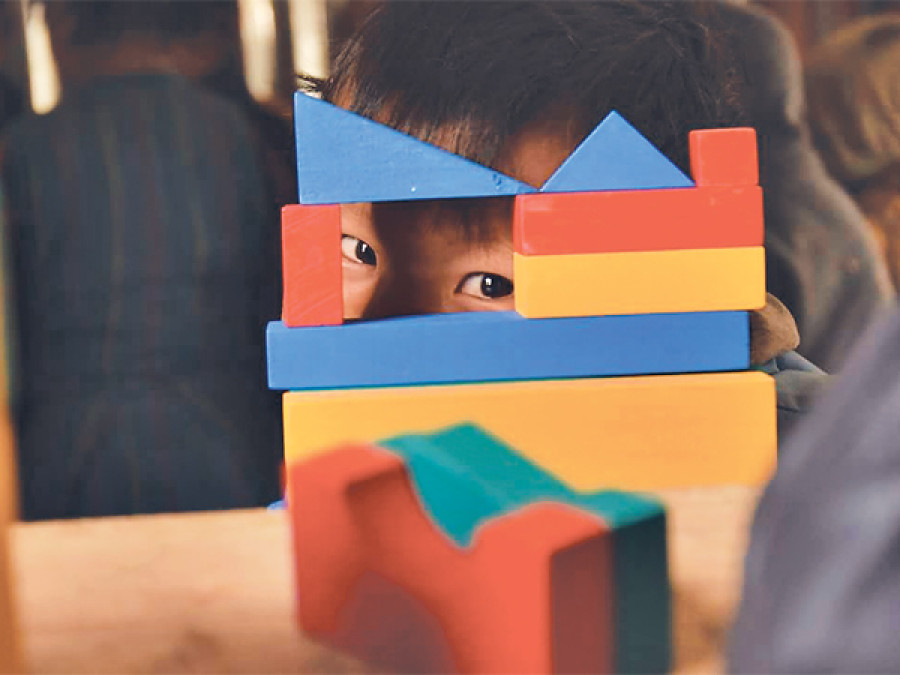 The students complain that the teachers never come; the teachers complain that the students never come,” a local told us on our second day in Gatlang, Rasuwa. I was in the Tamang village with a team of art educators, artists and musicians as a part of ArtWorks, a programme organised by an NGO Srijanalaya and sponsored by Shikshya Foundation Nepal. ArtWorks was conceptualised in late May with the intention of taking arts education to remote villages that had been ravaged by the earthquakes.

After ArtWorks’ visit to Ghyachchok, Gorkha in June, we decided to focus on a few things on our next trip: more sessions for primary school children, more engagement with teachers and more time for Srijanalaya’s artists to explore local culture and learn about traditional artistic practices such as music and dance.

On our first day in Gatlung, we met with the principal, a young, presentable man who had cooperated with Srijanalaya regarding logistical information. But he expressed doubts about our wish to conduct an early morning session with the teachers. He told us, some teachers had to walk from a distant neighbourhood. Eight am would be too early. Besides, he repeated more than once that there was ‘a lack of manpower’.

We witnessed the reality soon enough. Seven teachers, including the principal were responsible for teaching students from preschool through ninth grade, a total of about 300 children. Even if one teacher managed a grade, three classes would still remain unsupervised at any given time.

Our team of 15 took charge of the primary school, conducting literacy, arts and movement sessions for three and a half days. Our goal was to engage the teachers throughout the process, hoping that they would work along with us, provide support, feedback and criticism. But due to the ‘lack of manpower’, only a couple of teachers dropped in now and then into our classrooms. Thankfully, one teacher observed an entire art workshop and when we debriefed with the staff later that day, he mentioned that he was finally able to witness how the ideas he had heard in the previous trainings could be applied practically in the classroom. He mentioned how our educators facilitated learning in the classroom (instead of only providing direct instruction) by keeping students’ socio-emotional aspects in mind, how effective small group work could be and how our ‘student-centred’ approach made sense.

I returned from Gatlang with more notes regarding the problems facing schools in rural districts of Nepal, problems that have been dramatically exacerbated by the recent earthquakes. Almost eight months after the April quake, a semblance of normalcy has returned amongst the students and teachers in the affected districts. But let us not forget that the school buildings are constructed out of tin and wood while the floor is mud.

In Gatlang, we had planned to work with 34 preschool students and 32 first graders but we were overwhelmed by almost 100 students that ranged from ages three to six on our first day. Apparently, many families who had moved to Kathmandu had returned to the village after the quakes. As I implied earlier, these small children are largely unsupervised. Thankfully, unlike most rural school districts, Gatlang has a devoted preschool teacher who demonstrated an interest in our work. But he has to keep another job in order to supplement his meagre Rs 3,200 monthly salary. So he comes to school only when he can.

The quote at the beginning of this article strikes the heart of the matter. There is virtually no supervision and monitoring by the government in schools like the one in Gatlang. Some of the teachers we met are relatively new temporary transfers waiting to move to a more convenient location. They have received very little training regarding pedagogical ideas and classroom management skills. In addition, since these teachers are not well compensated in terms of salaries or benefits from the government, their morale is very low and they do not have much incentive to invest their time and effort in their work.

Primary school students, more than anything, need a structured routine. It is only when they can trust their teachers, are convinced (by the teachers) that their time at school is worthwhile, safe and engaging, they begin to start taking intellectual risks and opening up to the hard work of learning. Learning, as well as teaching, is exhausting. It involves a series of tasks that can be physically and emotionally draining. Various factors need to be put in place for high-functioning teaching and learning to occur. Physical infrastructure is only the first step.

When the Srijanalaya team gathered at the end of the third day, we reflected on our work, highlighting challenges and successes. For instance, it was important to acknowledge that we could not work with the teachers as closely as I had anticipated. But we have plans to return in early March. Hopefully, after the end of winter, there will be new energy in the school community.

It was also worth asking ourselves how effective our work had been, what kind of impact we were trying to make. “I’m pretty certain that at least a couple of students will remember this programme when they become adults,” Srijanalaya’s founder mentioned. “Perhaps those children will want to become teachers or artists. Apart from that, I was happy that we were able to get students to connect their work in the classroom to their daily lives.” The founder had planned lessons around artefacts, bringing daily items used in Tamang households into the classroom.

I wrapped up the session with two points. First, reminding the team that even spending only three and a half days with a community such as the one in Gatlang takes a lot of energy. It was important to acknowledge the work of regular teachers as being in the classroom day after day, week after week, is no easy feat. It is an aspect widely unappreciated, especially by policymakers and bureaucrats. Second, we may not have been able to engage all the teachers as closely as we wanted to, but we were somehow able to demonstrate how a primary school can run. Yes, there is a lack of resources, manpower, and materials. But before beginning a process of change, before trying to solve a problem, it is important to imagine possibilities. And sometimes, the only way to kickstart change is to demonstrate an alternate way of doing things, by providing a glimpse of how things can be done.

We may not have accomplished all our goals, but we probably lit a spark here and there.

Sometimes, we watched television together and she helped me identify new Bollywood stars. Pooja had long, straight hair and simple, ravishing beauty. “You can be a model, you know,” I joked with her sometimes.

Kunwar is a writer and educator based in Kathmandu