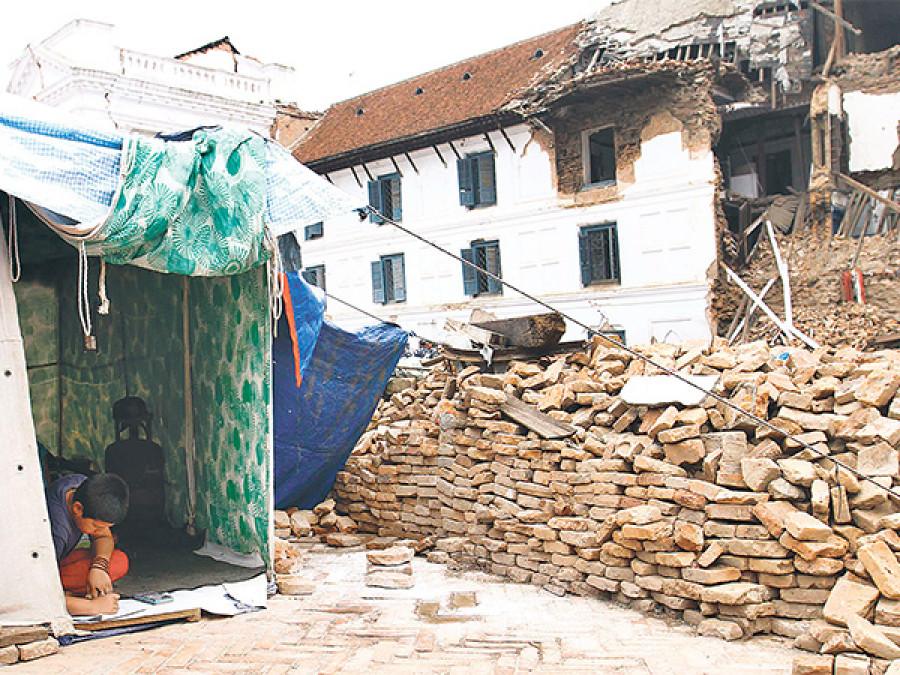 Rapid action and quick thinking is necessary when we are in crisis mode; but time should also be taken to examine and discuss delicate issues

I did not spend much time thinking about what I should do in the immediate aftermath of the April 25 earthquake. When a friend summoned us to the Yellow House on Day 3, I showed up, not fully aware of the scale of the devastation, and not fully knowing what made the most sense.

What followed were revelations on many levels. Each day was different and demanding. Enough has been written about the voluntary efforts and organic processes that evolved at the Yellow House. One of the reasons for our success was that we did not spend long hours discussing policies, processes or paperwork. The need of the hour was urgent. We all acted. In many different ways.

As Phase One - providing immediate relief materials to the districts - wound down, I finally started asking questions. Had I really been helpful? Instead of staying at the Yellow House for four consecutive weeks, perhaps I should have gone out on missions, witnessed and assessed the destruction with my own eyes and handed out materials with my own hands. Instead of coordinating voluntary efforts, answering phone calls and helping people connect to each other, perhaps I should have visited the sites and written reports. Perhaps I should have sought out orphanages and reached out to schools and teachers.

I bet we have all gone through several ‘insteads’ and ‘perhaps’. But no matter. The month is over. Phase Two has started and is underway.

Questions that have surfaced at the beginning of Phase Two are much more complex and challenging. Depending on who you are and what you do, these questions may have implications on several levels - personal and professional, national and political, to name a few. Since I am an educator who has been working as a freelancer in Nepal for the last two years, I immediately shifted my attention to my work. I invited artists, educators and therapists to The Yellow House so that connections could be made. But - should I have instead networked with the government so that I could be involved in a wider-scale initiative with a bigger reach? I interviewed with an INGO who worked on shelter and capacity building in four of the affected districts.

But something did not feel right.

It was a restive week. Answers weren’t easy. I kept combing through news reports that highlighted the need for school construction and the challenges for Nepal’s educational sector. A report from Scroll.In stated that “committing to an education agenda that is focused on quality as well as quantity remains a vital next step” for Nepal. How to do that in a timely manner so that students could get back to a normal routine as soon as possible? Also, how to address and manage the fear and anxiety that students and teachers might be facing?

I attended a session that sought to train several hundred teachers so that they could enter the classrooms with confidence. It was a wonderful initiative that sounded great. It also seemed a bit impractical and fraught with pedagogical problems. A crash course for teachers that focused on psycho social elements was the need of the hour, but an initiative like that automatically assumed that everyone was affected by the earthquake in the same way. Sure, hundreds of teachers and students needed support. But handing out disaster-themed lesson plans to teachers might force some teachers and students to relive the trauma when all they might want is some semblance of normalcy in their life.

Standards versus differentiation. Quantity versus quality. This critical dilemma finally compelled me to sit down and write.

“The preponderance of the textual over the critical, of the spiritual over the material, of the abstract over the concrete, of the magical over the empirical, of the didactic over the creative - more than anything else, characterizes the tradition of Nepalese scholarship.” I find it necessary to harken K. P. Malla’s words at this crucial juncture in Nepal’s socio-politics. Even though it was first published in 1970, this kind of teaching and learning practice is still prevalent in Nepal. Malla goes on to say that “creativity, non-conformism, questioning and criticism” has traditionally been lacking in Nepalese scholarship. Furthermore, most of those inclined to scholarship or industry have either migrated West or to the Middle East.

In a country so impoverished, both in an intellectual and material sense, and during a crisis so widespread and massive, the dangers of standardization and assumption has the potential of getting magnified and causing further harm.

Okay. Let’s just say that most of the teachers in the above example felt supported and were able to use the lesson plans. Let’s also say that some teachers and students who were somehow harmed during this large-scale initiative were ‘collateral damage.’ I, for one, can’t claim to have done much better either. My inclination to work with smaller groups and focus on quality may not even cause a ripple in Nepal’s educational landscape.

I am aware of all this. But I still think it is important to discuss these dilemmas.

It is commonly acknowledged in professional circles that teachers face several dilemmas during a regular classroom day. Should I answer a question that popped up five minutes before the bell ring or should I wait for the following day? Should I say Yes to an urgent bathroom plea or stick to my routine of no-bathrooms during the morning hour? More importantly, should I spend some time every day during the month of June addressing psychosocial needs or should I stick to my regular school routine?

But some educators, including my mentor in graduate school, have spent a lot of time - an entire doctoral thesis in this case - on teaching dilemmas. They have discovered that the more time teachers take to discuss these dilemmas, the better their capacity to make informed decisions. My mentor, in fact, wrote to me during the days after the earthquake and pointed out that her dissertation topic explored “the tension teachers face when there is a large scale traumatic event (in my case 9-11) that calls for teachers to find a balance between maintaining normalcy in the classroom and dealing with children's feelings and traumas.”

One strategy that seemed to work is to direct children’s attention to safety and rebuilding rather than describing or reliving the earthquake days.

This is an immensely challenging period for all of us. I just hope that extreme thought and care is given to policies and practices, especially ones that deal with addressing the needs of teachers and children.

Niranjan Kunwar is a writer and educator based in Kathmandu.