Looking in, looking out 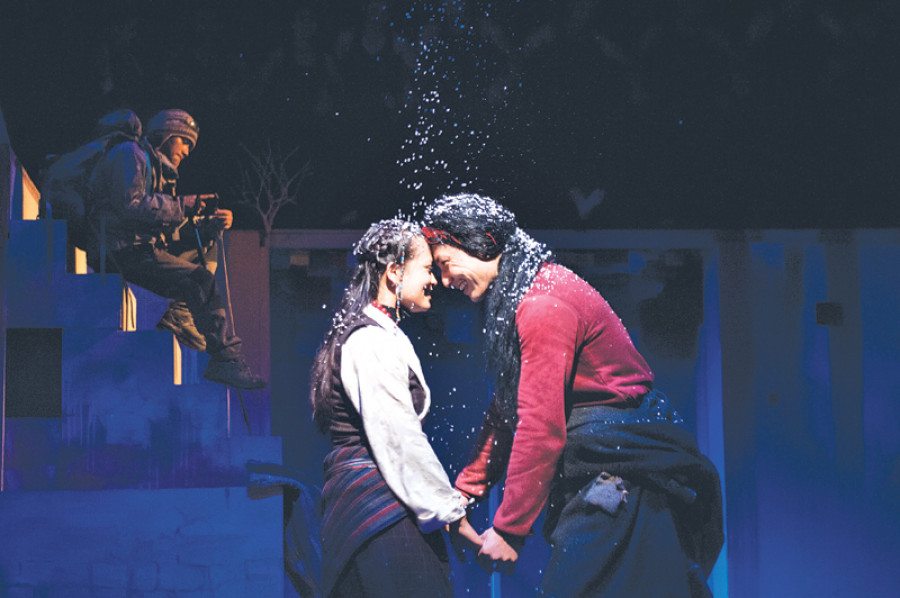 I was away from Nepal during the Aarohan Gurukul years. After returning, I learnt about Sunil Pokhrel’s theater work, mainly through word of mouth. He set up the Gurukul School of Theater in Purano Baneshwar in 2002 which became quite influential. Students received intensive residential training; they in turn participated in house-full productions. Due to various reasons, the physical space of Aarohan Gurukul was demolished after a nine-year run. I never got to see it. But some of Pokhrel’s students, I heard, clustered and founded their own theater groups.

I am not a student of theater. But I am constantly curious regarding the bubbling artistic energy that is apparent in Kathmandu these days. I believe that art can have a positive impact on an individual or a society. Theater, in particular, has a long history worldwide. It is a powerful multidisciplinary medium that often elicits visceral reactions. Hence, theater can convey provocative messages against ruling systems and has the potential to catalyze socio-political changes. In fact, Sunil Pokhrel was active even during the autocratic Panchayat era, putting up productions that sought to enlighten the public about basic rights and democratic values. In a country like Nepal - long cut off from the rest of the world, still transitioning from an oppressive, feudal society to a democratic republic - the significance of artistic endeavors can be manifold.

One can’t deny the elevated socio-political consciousness of the general Nepali public in the new millennium. That factor, combined with an unprecedented exposure to and exchange with societies in south Asia and Western countries, has directly impacted various art forms. There are a handful of examples in the film industry as well. The noteworthy 2008 release Kagbeni, Khagendra Lamichhane’s heartfelt Talakjung vs Tulke, Min Bahadur Bham’s fresh treatment of Kali Pothi and Deepak Rauniyar’s Highway and White Sun (which recently premiered at the 73rd Venice International Film Festival) are some examples of filmmakers engaging more deeply with unique subject matter and innovative techniques. These genuine artistic attempts have, at the very least, sent ripples across the stagnant stillwater of glitzy, superficial entertainment.

I did not mean to digress. I merely wanted to make a case that along with theater artists, filmmakers (and those in fine arts) are beginning to take bold steps. That one can notice an expanding consciousness, albeit very gradual, among practitioners. Recently, I sat through two different theater productions during the course of one week, an unusual luxury. The much-hyped fusion Arjuna’s Dilemma took me to Patan Museum’s inner courtyard on a Sunday evening, and a couple of days later, on a rainy Wednesday, I saw Anup Baral’s adaptation of Sarubhakta’s story, Thangla, at Shilpee Theater.

Set in an unnamed village in Nepal’s mountainous region, Thangla opens with a playful interaction between Pemba and the young Chhiring, both of whom live with Chhiring’s sister Bhumo and his mother Lobsang (played by Deeya Maskey). Lobsang is waiting for her husband to return from Tibet, where he went on a trade mission. The tension between the characters sharply increases after the husband’s return, who is surprised and quickly aggravated when he learns that the young Pemba has not yet bedded his wife Lobsang. Meanwhile, Pemba is caught between the expectations of his elders and his rapidly blossoming love for Kelsang. Thangla highlights this polygamous tradition - women typically keep multiple husbands - still practiced in some Janajati communities, and raises issues related to individual desire and will in the face of oppressive societal structures.

The lead actors are excellent; their mimesis of the communal dialect is admirable. But what stands out about this play is Anup Baral’s contemporary treatment of the drama. When I use the word contemporary, I am specifically referring to an ensemble of modern dancers whose entrances and exits punctuate well-crafted scenes. While the actors carry the story forward through dialogues, the dancers embody and convey subtler messages. For example, in one of Lobsang’s dream sequences, the dancers are vultures that signify death. In another scene in which Pemba and Kelsang express their love and discuss their uncertain future, the fraught tension between the protagonists is illustrated by a series of choreographed movements by the ensemble who start performing in a corner and gradually snake around and circle the lovers. Even though the black body suits worn by the dancers are strikingly different from the costumes of the actors - in fact their entire get-up and presence is far removed from the reality of the Sherpa community - the visual and dramatic effect of the ensemble is not jarring at all because their movements are precise. They add texture to the central conflict. They are alluring, enigmatic and they contribute really well to the overall experience.

I would like to juxtapose this particular aspect of Thangla to something similar in Arjuna’s Dilemma. Unlike Thangla, whose narrative is straightforward and plot-driven, Dilemma devotes its entire 70-minute run to the dramatization of a significant moment from the Bhagavad Gita, which takes place in a battlefield, in which Arjuna puts down his bow, refusing to go to war with his family. Besides him is Lord Krishna who reminds Arjuna of mortality and encourages him to follow the demands of Time. During the course of the play, while these two central characters interact and make their way around the elaborate set, a group of actors take center stage, alternating between battlefield drama, attempting to convey emotions through gestures and choreographed dance routines.

This is where I’d like to pause and reflect. This ensemble of supporting actors in Arjuna’s Dilemma largely detracted from the show. Their movements were confusing. Within the first ten minutes, it became clear that unlike the ensemble in Thangla, these were not trained dancers but actors attempting to do something they were clearly not used to. In an already crowded stage, professional opera singers Roy Stevens and Annalisa Winberg moved around, providing vocals to Arjuna’s and Krishna’s characters in three different languages - Sanskrit, Hindi and English. While any layman can appreciate the vocal range of these performers, their words were incomprehensible. On top of all this, there was an orchestra, a chorus, a saxophone solo and intermittent bhajans. Again, each of the musical pieces stood out but they didn’t gel with the narration or the dancing ensemble.

Debora Merola, stage director of Dilemma, has spent seven years in Nepal. She has successfully introduced Nepali actors and theatergoers to numerous Western plays. The Laramie Project, staged at Theater Village in early 2015, was memorable. Based on real-life events surrounding the torture and murder of Matthew Shepard, the play brought out challenges faced by the LGBT community and featured lesbian and gay characters. It can be argued that the content and setting of The Laramie Project may have been a bit esoteric for the regular middle-class Nepali. But Merola should be credited for tackling a controversial issue. Similarly, she was able to bring out convincing performances from the lead actors in the Cuban family drama Anna in the Tropics, based on Nilo Cruz’s Pulitzer prize winning play.

Dilemma is a unique example where reputed Western artists collaborated with Nepali professionals in a spirit of experimentation. The show looks out at the larger world, fusing Eastern and Western traditions of storytelling and artistic practices. In the September 2016 issue of ECS magazine, Merola has written an article introducing Arjuna’s Dilemma. In the article, she has humbly admitted that she is new to opera, that she was initially hesitant about the project. But she decided to make a leap of faith, which is a commendable endeavor. Unfortunately, the incoherent stage direction of Arjuna’s Dilemma validates her initial hesitation. It is clear that Merola is able to succeed when she is familiar with the subject matter, that perhaps directing plot- and character-driven plays is her forte. When it came to stage-directing a fusion opera filled with multiple artists and a musical ensemble, she faltered.

On the other hand, Thangla delves further inward into Nepal, excavating traditional dynamics of a family who belong to an underrepresented marginalized community. Dilemma and Thangla are very different productions in terms of their scope, style and content - both of these approaches are necessary in order for artists to explore their ranges, seek new horizons, and to continually learn and grow. But artworks create an impact only if they are well-executed. Anup Baral’s direction is cohesive and seamless. There is a beautiful synchronicity of starkly varied elements that add value to each other; not an easy feat. The contribution of the dancing ensemble is particularly meaningful in Thangla. It strengthens the narrative. In Arjuna’s Dilemma, there is too much going on, but not enough clarity. Even the graceful movements of ballerina Alize Biannic, who embodies Gandiva, Arjuna’s bow, appears wasted. This is another example of how disparate elements remain scattered and fail to convey a sense of purpose in the show. One almost gets the feeling that the production is weighed down by the sheer number of local and international stars and is unable to take off.

A reviewer used the word sublime while describing Arjuna’s Dilemma. I would say there is only a half-hearted attempt to reach the sublime. The show unfortunately falls flat. When that happens, theater becomes pretentious and inaccessible, failing to connect with the audience, further alienating curious open minded public from the discipline. Thangla has the opposite effect. The experience was uplifting. The characters are endearing. One wants to spend more time with them, get to know them better. The credit goes to the director who is clearly knowledgeable and in control of content, fully empathetic to the plight of his characters. Although thirty minutes longer than Dilemma, Thangla felt much shorter. I must have looked at my watch a few times while sitting through Dilemma but I failed to notice the passage of time during Thangla.

Niranjan Kunwar is an Assistant Editor of La.lit, a literary magazine, and also works as an educational consultant. Thangla will run at Shilpee Theater until October 1, 2016.