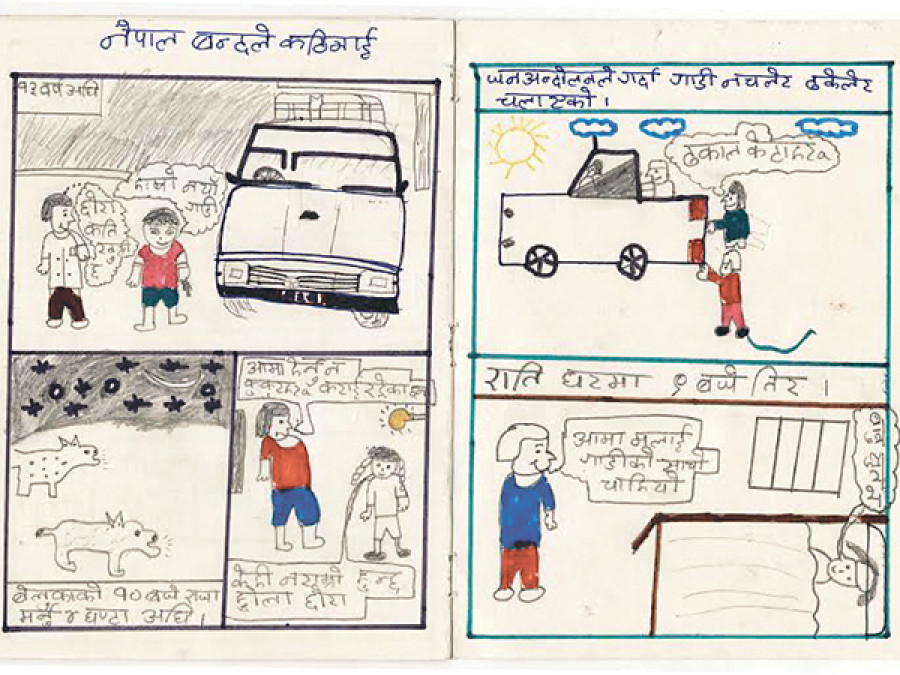 If history units are presented in a fun and meaningful way to young students, they will be more engaged, and hence, become more active participants in our country’s matters.

As a part of Nepal Picture Library’s educational program, “Retelling Histories - Imagining an Inclusive Nepali Past,” we recently completed a unit piloted in two eighth grade classes. One was a private school classroom and the other one was in a government school.

The lessons were supposed to start in early May but due to the quakes, we were compelled to rethink and redesign. Phase One (the pilot program in the two schools) was cut short and Phase Two was lengthened (in order to include more schools). In any case, we worked with teachers and students during the three two-hour lessons that were completed within a month.

During the course of the unit, I had noticed student responses, examined student work and exchanged verbal notes with my colleague. But it was important to review the curriculum thoroughly and incorporate the changes in Phase Two schools. We are also in the process of compiling all of these teaching materials - lesson plans, handouts, photos and samples of student work, along with our reflections - in a teacher manual that we plan to distribute to a wider pool of teachers in an upcoming seminar. Furthermore, the message - that curriculum reviews and reflections should be an integral part of the teaching profession - needed to be explicitly conveyed.

So I sat down with my colleague to jot down thoughts. We realized that the unit was content-heavy, packed with several new ideas that we tried to teach within a relatively short period. Our primary teaching document, titled “Historical Highlights,” is a list of important political movements and transitions that took place in Nepal between 1951 and early 2015: the end of the Rana regime, the brief democratic period before the Panchayat era, the two People’s Movements, the People's’ War, the subsequent downfall of the monarchy and the naming of Nepal as a republic. Interspersed amidst dates and statements are names of key political personalities.

We did not expect students to remember all these facts. We merely wanted to give them an idea of Nepal’s recent political arc. More importantly, our unit required students to make personal connections with these political transitions. Students were asked to focus on one of the events; for example, the first People’s Movement, and talk to family members about that time period in order to find out more about familial circumstances. Then they wrote reflections focusing on what they had learned about Nepal’s politics and their family histories. They also made collages using political and family photos, as well as magazine strips, pencils and markers.

There was a need to modify the way we presented the Highlights to the students; a couple of main ideas needed emphasis. With that in mind, during our review, we included a subtitle in the document - Nepal’s struggle for a constitution - and tied that idea to the current debates taking place in the media and within social circles. The political photos we projected alongside the Highlights - interdisciplinary approach infused with the arts being one of the goals of the unit - were too many. So we took out a few and labeled them with the names of personalities wherever appropriate.

Finally, we realized that the collage was not the most appropriate medium for this unit. There were too many materials involved and it seemed like a new concept for the government school students. So we prepared small booklets that could contain notes and sketches by the students.

The State of Students

I am wary about drawing conclusions based on one short pilot project. But I wanted to share some observations, hoping that they will somehow be useful to interested folks. In general, students in both schools were not familiar with most of the political events. Some had heard about the Peoples’ War but most seemed unaware.

The private school students had a relatively easier time with the collage-making. I know that this particular school places a high emphasis on the arts and the students were probably familiar with the medium. For the artwork, we had instructed the students to connect political events with family history and represent that connection in their collages. The government school students had a very difficult time processing these ideas and coming up with qualitative work. To be fair, this group of students had shorter lessons and there was also more than a week’s gap between the first two lessons. Hence, most students had forgotten facts and misplaced sheets. But we realized that the task itself involved multi-step processing, and there was a need to break down the activities carefully.

When teachers ask too much from students, there is a danger of confusing and overwhelming them. Regardless, there was still a clear discrepancy between the levels of these two groups of students. It is possible that over the years, the government school students - specially the weaker ones - did not get as much attention from teachers and continually fell behind over the years as coursework increased. Their ability to remember details and make meaningful connections were much below what is expected from an average eighth grade class.

One of our main goals is to make history interesting for young students. Another is to make the subject interdisciplinary. A third goal is to bring in diverse family histories into the classroom so that stories from marginalized groups can be a part of the curriculum. The issues of who writes history, whose history is important and what students need to learn need careful examination. We are hoping to engage various educators and policy-makers with these ideas.

Major political developments have unravelled in Nepal in the last few decades; but a very small part of this is reflected in the revised Social Studies textbooks. There is an urgency to inform young students about these events so that they can be active participants in our country’s future. If students’ interests aren’t sparked at the right time, they turn apathetic. As the trend goes, most of the privileged students will go abroad and become bankers and techies while the rest will scrounge and stay in long queues to go to the Middle East.

This article is a follow up to “Charting a Course,” published in these pages and also available online. Niranjan Kunwar is a writer and educator based in Kathmandu.