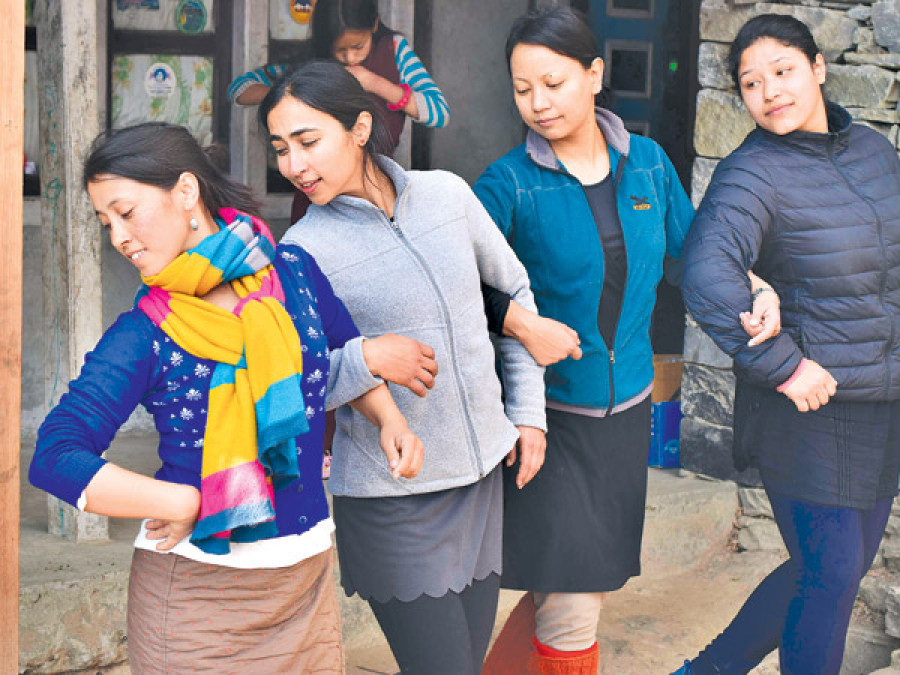 Introducing arts education to a marginalized school community in Rasuwa.

On a chilly evening last December, two Tamang women appeared at the front yard of a guest house in Gatlang, one of Rasuwa districts impoverished villages, hit hard by the April and May earthquakes. They were greeted effusively by Subima Shrestha, a trained Kathak dancer who is also an arts educator. The day before, Shrestha had followed a local’s lead to meet the Tamang dancers and invited them to the lodge.That evening, amidst giggles, Shrestha requested the women to show her some moves. Eventually sneaking herself between the two, she followed the rhythm of their feet.

Meanwhile, three ethnomusicology students from Kathmandu University’s School of Arts went through a similar process. They also sought out local musicians. Accompanied by colleagues, Shrestha and the musicians had travelled to Gatlang with a dual purpose - to explore traditional dance and musical beats and also to conduct workshops with the government school’s children. On one of the workshop days at the school, the musicians invited Gatlang local Nima Tamang into a classroom so that he could play tungna in front of the young students. Tungna, casually known as “the Tibetan guitar” is usually made from a single piece of carved wood and has four strings. Since Rasuwa adjoins the Chinese border, much of its traditional and cultural practices have links with Tibet.

Upon returning to Kathmandu, Subima Shrestha rehearsed the steps she had learnt from the Gatlang women, incorporating Kathak movements into a short choreographed piece. Shrestha practiced the fusion piece with three other dancers and the KU musicians, who had also been experimenting with various tunes and instruments since their return. This piece was performed on a Saturday earlier this month at the Gatlang school yard as part of Srijanalaya’s “Art Works, Sangai Khelaun” program.

The program, sponsored by Shikshya Foundation Nepal, was launched in May 2015 as a response to the earthquakes. Srijanalaya assembles a team of arts educators and organizes trips to remote, earthquake ravaged districts. The basic goal of the program - especially for its pilot trip to Ghyachchak, Gorkha in June 2015 - is to spread cheer and boost the morale of the community. But every trip has provided unique learning opportunities and hence, the program has evolved over the months, becoming multi-faceted and multidimensional, with a core focus on arts education.

For example, during the week that led to the culminating performances on March 5, Shrestha collaborated with Sunita Maharjan, a visual artist and a dancer. The two women conducted movement workshops with a mixed group of secondary school students and prepared them for a performance. The narrative arc of the piece was suggested by a seventh grade student, Mingmar Wangmo Tamang, who relayed a story about a man who turns into a monkey. She had learnt the tale from her grandmother.

In the meantime, three other groups of students - randomly distributed - learned basic lessons in music, drawing and poetry. “Kids didn’t take to poetry easily at first,” reflected Nischal Neupane, who led the sessions with a colleague. The only texts they identified as poems were the ones they had learnt to recite in Nepali class, poems about big, abstract ideas like our country, poverty, nature, etc. It took a couple of sessions for him to convey that one can write poems about virtually anything. After several exercises, some students came up with these lines:

(The poem mentions a village lake and also includes references to collapsed homes.)

At the beginning of her essay, “Art and Imagination: Reclaiming the sense of possibility”, Maxine Greene asks: Can encounters with the arts move the young to imagine, to extend, and to renew?” It can be inferred that this question guides Srijanalaya’s work; the implicit ideas inform much of Art Works’ program design. In a video interview with M & S, uploaded online on Feb 18, 2016, Sharareh Bajracharya, Srijanalaya’s president, mentioned: “I was not satisfied with the way Nepal’s education system functions, with its emphasis on rote-learning. There is very little time for students to think about their own lives and interests,” she reiterated, “because they are constantly bogged down by homework and tests.” Performance artist Ashmina Ranjit also shares this view. For a long time, Ranjit has been creating artwork to raise awareness about various issues, particularly around feminism. Ranjit recently established a collective that offers art classes to young students.

International educationalist Sir Ken Robinson has also spoken about these interconnected ideas. In a popular video titled “Do schools kill creativity?”, he emphasizes that creativity should be given as much importance in schools as literacy. He speaks about the hierarchy of subjects, a tendency amongst school districts all over the world to push subjects such as dance, music and fine arts to the very bottom. Academic ability is often confused with intelligence and brilliance. In an environment like this, students with innate artistic inclinations are rarely supported, often stigmatized. “Intelligence is dynamic and wonderfully interactive,” Robinson elaborates, connecting that idea to creativity which he defines as a process of having original ideas that have value. The more one engages with various disciplines, the more creative and intelligent one is.

The majority of schools in Nepal are grappling with acute problems. It often seems that the sole ambition of most government school teachers, whenever present at their jobs, is to make their students pass the School Leaving Certificate (SLC) exams. Even then, the rate of failure is massive. The number of students - especially in rural, marginalized communities like Gatlang - who drop out of school either before or after the SLC exams, is staggering. Unable to imagine a future through the usual route of higher education, most young men and women leave as soon as they get a chance, either to Kathmandu - where they find menial employment - or to work abroad as manual laborers. The government’s presence in these school districts, regarding supervision and accountability, is almost non-existent.

In this disheartening context, the Art Works program is a drop in the ocean. But it is still a beginning. And it’s the beginning of an approach that embraces inclusive politics, has a deep faith in humanity, and functions with a belief, as Greene wrote, that “participatory involvement with the many forms of art does enable us, at the very least, to see more in our experience, to hear more on normally unheard frequencies, to become conscious of what daily routines, habits and conventions have obscured.” It is also an attempt, as Robinson suggested, to introduce creativity into the lives of students.

Apart from a few exceptions, the Gatlang students had never used paintbrushes and water color before. When asked to draw on the first day, almost everyone drew (you guessed it!) two baseless triangles at the top of a page, from the middle of which two other lines snaked down, representing mountains and rivers, a sign that their imagination might be frozen. Most students did not know about the tungna, even though the instrument is native to the region. Students are getting educated out of their creative capacities. School curricula have very little space where students can make meaningful connections with their personal lives. Creativity and learning are innate to humans. But if the process is not engaging, if the emphasis is skewed, the joy that ought to naturally accompany inquiry, discovery and creative expressions get extinguished at an early age.

Since Gatlang has electricity, thanks to the Chilime hydropower, some households have television. Wifi has also entered the village. The lodge owners’ children are already hooked on Zee TV and Indian cartoon series. The villagers are rapidly losing their traditional cultural practices, the children are trapped in an education system that offers very little space for imagination and creativity. Critical thinking and awareness of their place in the world is severely lacking amongst the students. To that end, being mindful of the Tamang culture and language is at the heart of the Gatlang Art Works’ program. Subima Shrestha’s work with the musicians could be viewed as a model. Learning the dance moves and musical beats from the Tamang people is a conscious effort to value and respect their traditional knowledge and bring that into the classrooms. Similarly, students were encouraged to write poetry in Tamang language. During a December art workshop with younger students, facilitators brought items common in Tamang households to the school and asked students to observe and sketch them.

“We have to rethink the fundamental principles in which we are educating our children,” said Robinson. We have no idea what the world will look like in fifty years, he elaborated, suggesting that curricula should be designed with that in mind. Developed countries are gradually adopting these ideas, even though the tendency to neglect the arts and emphasize “manageable, predictable and measurable” disciplines such as math and science is still there. But the situation is dismal in Nepal. Art classes, even in reputed private schools in Kathmandu, are conducted within a stringent structure that leaves out crucial pedagogical elements. In Gatlang, preliminary ideas were introduced to struggling, marginalized students with the hope of opening mental and emotional doors. It would be ideal to have these classes as a regular part of the school curricula. But due to lack of adequate government support, the reality is very different.

As concluding remarks, Robinson said, “I believe our only hope for the future is to adopt a new conception of human ecology, one in which we start to reconstitute the richness of human capacity.”

Apart from direct and indirect benefits to the Gatlang students, the Art Works program is a dynamic, integrated approach that touches on several other possibilities. It provides an opportunity for individuals from Kathmandu to venture into Nepal’s rural villages and immerse themselves in learning. It is important for anyone to leave their comfort zones once in a while. With that in mind, after the completion of the one-week program, Bajracharya and Maharjan are staying back in Gatlang for the entire month of March as part of an artist residency. They will be joined by another contemporary artist from Kathmandu as well. Maharjan hopes to learn weaving techniques from the Gatlang people and incorporate that into her work.

In light of the earthquake's’ devastation, involvement with the arts will certainly help not just students but teachers and community members to repair and heal. But as Greene says, encounters with the many forms of arts frequently “move us to restore some kind of order.” By engaging the thoughts and emotions of our citizens, by providing a platform for them to express and create, Srijanalaya members are hopeful that, at the very least, the seeds of regeneration may get planted in the hearts and minds of some of these community members. The culminating performances were planned with this in mind. If art can leave a beautiful impact, if the interactions can inspire, perhaps what has been lost over the decades can be gradually reclaimed and restored.