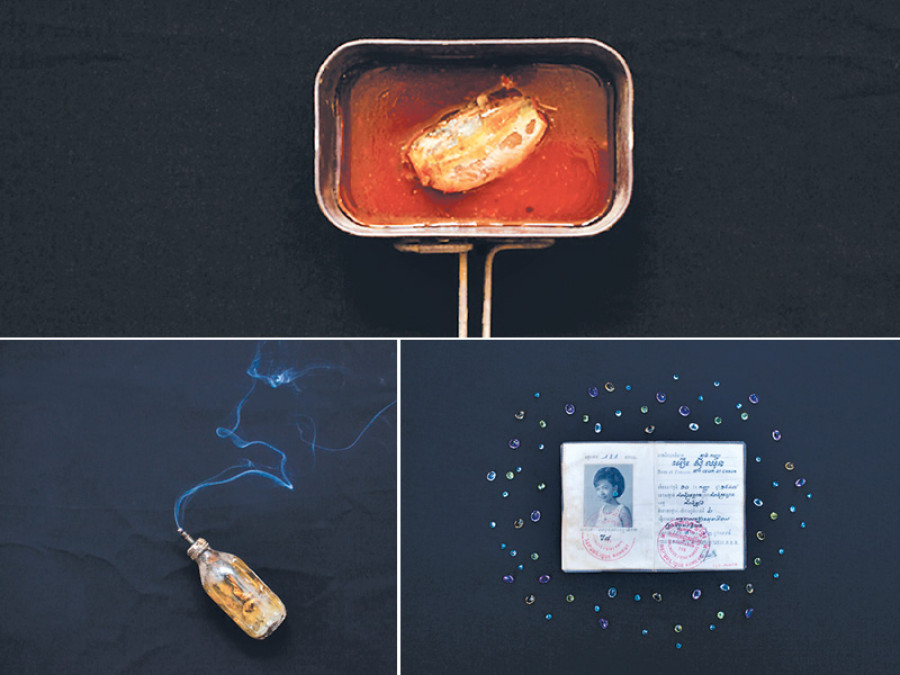 Dusk was approaching as I headed towards Eba Bahi, along a busy street that shoots straight out of Mangal Bazaar towards Lagankhel. I had heard the name for the first time while browsing through Photo Kathmandu’s program. A blue festival marker directed me to a set of stone slabs that led me up to an open courtyard, perched above and away from the din and clamor of the frantic Tihar traffic below.

The final remnants of daylight helped me make out a few details: a white chaitya, streaked with red and yellow, was at the center of the courtyard, behind which stood a metal frame that enclosed a house of god. A small pagoda jutted above the shrine. Adjoining the pagoda on both sides were roofs covered in curved tiles. They ran above and along a two-storeyed complex that guarded the courtyard on all four sides.

The quietness drew me in and I made my way towards the right, where a photo exhibition was ongoing. A wooden fence separated this newly renovated space from the courtyard; narrow bars crisscrossed within the frame of this fence, creating many vacant squares. Above the fence, cylindrical wooden bulbs dangled from the roof in a neat row, a feature that added to the aura of this old Buddhist monastery.

I couldn’t have chosen a better time to visit Kim Hak’s photo story because the black background of each photo seemed to allude to the darkness that had just descended around me; as if I was there as a connector, as if it was within my being that time and place converged. And I paused for a few moments, getting a sense of collective memories and massive movements, worldly wishes working their ways, surrounded by flashes of activism and aesthetics.

Kim Hak’s project “Alive” features objects entrusted to him by Cambodian families, forty years after the Khmer Rouge regime. These were objects they had taken with them to work camps in the countryside during the seventies’ civil war. Most belongings had to be abandoned; only basic items were permitted - clothing, utensils, medicines. Hak’s photographs depicts these ordinary, everyday objects. There is a photo of a sandal that belonged to Hak’s father which he bought right after the war. A caption explains that not everyone was allowed to wear sandals at the work camps; many had to walk on thorny paths. Hak has placed a thorny twig above a dusty footprint next to the sandal.

It is the composition of this duality that spoke to me most directly. Every photograph has a concrete object (a sandal) juxtaposed with an element that Hak drew from the survivor’s memory (having to walk barefoot). These two aspects are arranged uniquely in every photograph, highlighting shapes and colors in such a way that the result is immediately arresting, never straightforward.

It was perhaps Hak’s exhibition, and the feelings it evoked, that prompted me to ask the question “Why take photos?” to a group of secondary school students the day after. The group had arrived for a guided tour, part of Photo Kathmandu’s arts and education program. We started each tour with an introduction to the photo festival in order to provide some context and ended by getting students to reflect on their experiences.

After visiting Kim Hak’s exhibition at Eba Bahi, I wanted the students to think more generally about the purpose behind taking photographs. During the course of the discussion, apart from “sharing new experiences”, other ideas emerged, which I noted on the whiteboard: to capture moments and memories, to capture beauty, to document for self or for society, to manufacture and push new ideologies. While all these ideas relate to one another - a body of photography usually stands out if it attempts to touch on all of these - some work may lean more towards one idea than another.

Kim Hak’s work is particularly powerful because various ideas relating to the purpose of photography seamlessly come together. Objects that hold memories directly related to a major socio-political event in Cambodian history are graciously and carefully presented. Here is a chance for visitors to get curious and learn about a world event, to grapple with complex political ideas such as communist socialism, to learn about the arts and culture of a country in the region; to consider why we take photographs and how to present an idea in a way that makes an impact.

It was all of these themes, but primarily the beauty that had struck me; beauty emanating from unlikely sources - a pair of scissors surrounded by an old woman’s white hair, a bottle of fish oil connected to a trail of blue smoke, a military mess tin can with a piece of fish, an identity card surrounded by small jewels. And beauty, in this project, stood out more fiercely because of the way it was juxtaposed to horror.

That first evening, as I walked along Eba Bahi’s ground floor, I was all too aware of this inherent conflict. The soft lights hanging overhead highlighted the irony even more. After everything else was subdued and hidden by night, there I was in front of an old kettle (which has been with Hak’s family since 1970) out of which a pair of chicken claws peeked (the Khmer Rouge forbade Cambodians to cook chicken); there I was confronted by life and death, by evil and elegance, by light and darkness.

I returned the following evening when the darkness was more complete and the street rush more heightened. Coincidentally, a group of women sat in front of the chaitya, chanting an ancient tune. After another quick scan of Hak’s photos, I walked over to the other edge of the monastery and remained there for a few moments, away from everything. Soft cotton light washed the devotees’ faces while the gallery glowed brightly behind them. From the tiny empty squares on the wooden fence, bits and pieces of Hak’s photos peeked out.

On my third visit, I spent some time with Kim Hak himself, who was at Eba Bahi as part of an art workshop he had conducted with a couple of art educators. The workshop was modeled after Hak’s work. Participants were asked to bring special objects from their own homes. After completing, everyone had assembled at Eba Bahi to display their work. Some had brought old Nepali coins no longer in use, a wooden boat used for knitting, a set of key and lock covered in divine carvings.

Later, Hak told me about his plans to visit the Golden Temple the following morning, his last day in Kathmandu, before taking off to Phnom Penh. On our way out of Eba Bahi, Hak stopped at a store whose interior was filled with copper and bronze utensils that sparkled and glowed. He picked up a miniature version of a diya-stand and requested to purchase two identical ones. I later noticed him examining another uniquely designed copper mug that was covered with small circular dents. I picked up the copper mug, having decided that I wanted three of those - one for myself and one each for my two cousins who would put bhaitika on me in a few days.

Dusk had fallen once again. After paying, I hurriedly stuffed three cubical boxes inside my backpack, thrilled, for I felt that I had suddenly encountered and captured something utterly beautiful.

Kunwar is an Assistant Editor of La.lit, a literary magazine, and also works as an educational consultant.